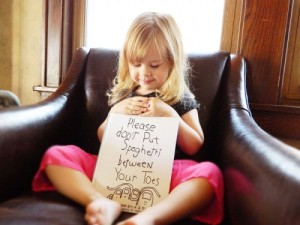 And, apparently, their funny phrases can inspire art. Martin Bruckner, a Nebraska dad, is turning his 3-year-old daughter’s sayings into hilariously beautiful art and cataloging it all on his Tumblr “Spaghetti Toes.”

Spaghetti Toes is his blog dedicated to the delightfully absurd things Bruckner hears from his daughter Harper Grace — plus the equally bizarre things he and his wife find themselves saying while navigating life with a toddler. The moniker Spaghetti Toes itself comes from such silliness.

“The name ‘Spaghetti Toes’ comes from my wife saying to my daughter ‘Please don’t put spaghetti between your toes’ at the dinner table. I said to my wife, ‘Did you actually just say those words?’ and Spaghetti Toes was born,” Bruckner says in his inaugural Tumblr post.

He has gone on to illustrate many more adorable musings from life with Harper Grace — and even turned some of them into a book for his wife on Mother’s Day.

Here are some of our favorites!