Home  •  Awesome  •  10 Celebrities That Had The Absolute BEST First Tweets Ever In The History Of Twitter!
Awesome (1009)

10 Celebrities That Had The Absolute BEST First Tweets Ever In The History Of Twitter!

Yeah, that doesn’t happen when you’re famous. Just the other day, Monica Lewinsky sent out her first tweet ever, with a simple hashtag-ed, #HereWeGo. It was re-tweeted three thousand times. She already has over fifty thousand followers. Clearly, she took a good first step on Twitter. So, in honor of her big debut, let’s take a look back at some of the very best celebrity first tweets we’ve ever seen.

When Twitter first started, this was actually the best joke ever before we learned how to keep our thoughts concise, too the point, and less than 140 spaces. 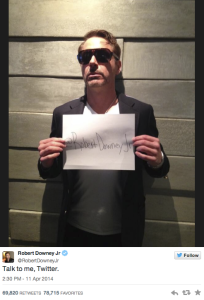 Bonus points for his bio which simply reads: you know who I am.

Way back before he was Star Lord, Chris Pratt only had 40 people retweet this. 40! That’s unheard of for him nowadays.

A first tweet and a movie recommendation? Oh yeah!

Just the beginning of many more very special cat moments with T-Swift.

PSA: if you’re not following Josh Groban on Twitter, you should be, because he is the unsung hilarious hero of 140 characters.

This tweet happened right after his show was canceled on NBC. Sad day for us all — but at least he started tweeting.

That one happened just the other day, and I laughed for a good long while because Eric Matthews will always have a place in my heart.