Shoutout To Riley Curry, The Real MVP Of The 2015 NBA Finals!

From what I’ve been told, there was an incredibly important basketball game last night in which the Golden State Warriors won the NBA Championship for the first time in 40 years. All of my knowledge of this game comes from Twitter (I’m not exactly a “sports person”).

Although I’m happy that Steph Curry’s team beat Lebron James, I think it’s time that we all recognize that the real MVP of the finals season was Riley Curry, AKA the absolute cutest 2-year-old in the NBA.

Because we have such a huge obsession with Riley, we have compiled a list of Riley’s 5 most adorable moments from the 2015 season.

1. Riley first came into the spotlight when she stole the show and became the star of a May 19th press conference:

2. In a second press conference, Riley sang a little song to her adoring audience:

3. Riley and her dad did a pregame pump-up just before the first game against the Cavaliers. Needless to say, it was absolutely precious:

4. Riley might have been a little exhausted at last night’s game, but she was happy to celebrate the victory with her dad:

5. Lastly, while Steph was taking a photo with the new trophy, Riley decided that she too would need her picture taken.

Riley’s wish eventually came true and she and her parents took an absolutely PERFECT photo with the NBA Championship trophy. (Can you say relationship/family/life goals?!) 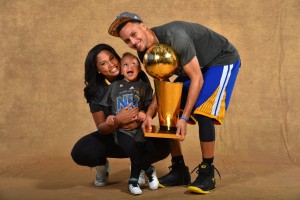 Riley, you’ve had a great season and we hope that you bring the same adorable awesomeness to the NBA next season as well! 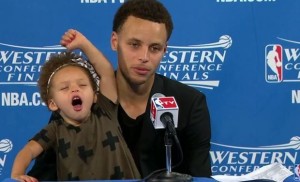 Images via and via.
Article by: Alissa Fairchild > Twitter