Home  •  Awesome  •  This Is Extremely Important: Oreo Is Introducing A Red Velvet Flavor And We Are Super Excited
Awesome (1009)

This Is Extremely Important: Oreo Is Introducing A Red Velvet Flavor And We Are Super Excited

This is not a test. This is real. This is happening. And in February you will be able to buy red velvet Oreos because life is filled with unexpected joys.

Can anyone truthfully recall a time before the red velvet craze swept the nation like a super cute boy band? I myself stood in manya long line waiting for red velvet cupcakes, and the payoff was always DELICIOUS. Then, of course, came the red velvet flavored other things, including ice cream (also delicious), whoopie pies (same) and even red velvet candles (seriously, I own one).

Well this new Oreo flavor is just a delightful little gift, a limited edition gift (sniff, sniff), that we are thanking the Oreo gods for. 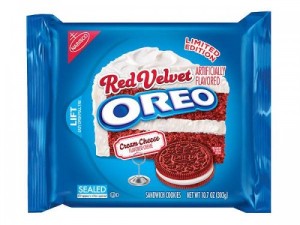 Well, joy has dawned in our hearts again because the Oreo announcement we’ve been waiting for has arrived. Just in time for Valentine’s day, February 2nd to be exact, the red velvet Oreos will be coming our way. The Oreo even has cream cheese filling, so I’m already dreaming of that Double Stuffed goodness (which I’ll have to make myself, since there doesn’t appear to be a Double Stuffed red velvet Oreo, alas).

This flavor is only slated to be a limited run series, for probably about six to eight weeks, or until they all sell out. So, I’d suggest heading to your nearest grocery store to await their arrival and obviously stockpile enough for the next six to eight years. This honestly is the best cookie-themed Valentine’s Day surprise we could have asked for. (And yes, we’ll be breaking Valentine’s Day surprises into food groups this year.)