She may not write about wizards and Quidditch, but 24-year-old Zoe Sugg, better known as Zoella, is on track to become the most financially successful British writer since J.K. Rowling.

Sugg, who became a viral video star thanks to her beauty and fashion videos on YouTube, just published her first novel, Girl Online. The book flew off the shelves, selling more copies it its first week than any other debut novel in the UK on record. That’s right: She eclipsed the first week sales of Harry Potter. And she’s not even 25 yet. That’s a big deal. Girl Online is now the fastest-selling British book of 2014. 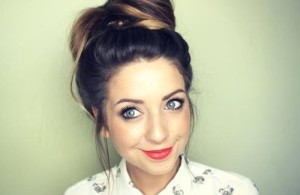 The book is about a high school girl named Penny, who blogs about her personal life and feelings under the alias Girl Online (obvs), and meets a dashing musician named Noah after her family moves to New York. Basically, it’s being called a YA Notting Hill. Sugg has already nabbed a deal for a sequel.

Sugg is famous in the U.K. not just for her incredibly popular videos, where she also addresses issues like body image and anxiety disorders, but also for her wholesome image. She’s open about not doing drugs or drinking alcohol, which has gained wide approval—especially from her fans’ parents. 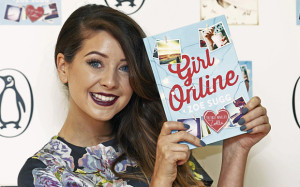 Sugg is relishing in her success right now. “It’s such an amazing feeling,” Sugg said in a statement. “I’m so grateful to everyone who has bought a copy of Girl Online. I love that so many of my viewers are enjoying the book! This year has been so exciting and this for sure is the icing on the cake.”

By the way, future bestsellers, it all started for Sugg with a simple blog.

“I never had any structure, I never thought this is where I want it to go,” she told the Financial Times earlier this year. “It was literally like my little space on the Internet, where I just used to write about the things I loved, or things that I thought other people would love as well.”

How’s that for some sweet inspiration?