Home  •  Awesome  •  SpongeBob Squarepants Has Declared Today The “Day Of Positivity” And We Are Definitely Supporting It!
Awesome (1009)

SpongeBob Squarepants Has Declared Today The “Day Of Positivity” And We Are Definitely Supporting It!

This morning, you might have been scrolling through your Twitter feed and come across a post from SpongeBob SquarePants and thought, “I do not follow SpongeBob SquarePants.” Don’t worry, you weren’t alone in the confusion — it was very much a promoted tweet. BUT, it was a promoted tweet with a pretty good message: Sponge Bob and his human architects have declared today, January 5th, the “Day of Positivity.” 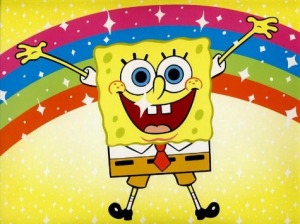 More than likely you trekked back to work today after your holiday vacation, and were less than pleased to be facing another Monday. So really, this Day of Positivity couldn’t have come at a better time, or from a better sponge. And SpongeBob even went ahead and wrote a song about today:

SpongeBob is one of these eternal optimists, who, even in the worst of situations, always sees the glass as half full (like, in the case of Mondays). Let’s all get on board with this cartoonish outlook for the day (and what will probably be a really long week) and remember some other rather wise words of wisdom from our favorite sponge. No seriously, SBSP doesn’t get enough credit for being a master of joyful sayings. These are some things born from the weird mouth of a talking sponge:

On great service: What’s better than serving up smiles?

On true friends: In life we never lose friends, we only learn who are true ones are.

On a sunny disposition: Don’t worry, tomorrow we’ll be back for more frolic and fun!

On making mistakes: All those wrong notes you played made it sound more original.

On the here and now: You will never know the true value of moment until it becomes a memory.

On moving forward: Let go of what kills you and hold on to what keeps you breathing.

On inner strength: If you believe in yourself and with a tiny pinch of magic, all your dreams cane come true.

On believing in others: No one can change a person, but someone can be a reason for that person to change.

On perseverance: As long as these pants are square, and this sponge is Bob, I will not let you down.

And one from Patrick Star: Sometimes we have to go deep inside ourselves to solve our problems.

That’s all pretty wise advice from a yellow sponge who lives in a pineapple under the sea.