Unforgettable And Inspiring Quotes From The Legendary Stuart Scott 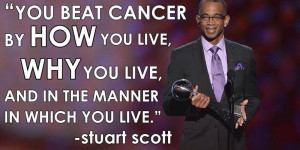 Legendary ESPN “Sportscenter” anchor Stuart Scott passed away on the morning of January 4 after losing his seven-year fight to cancer. While he was most remembered for his humorous catchphrases and refreshing interviews, Scott was a man who prided himself on one thing above all else: being a great father. He loved his two daughters, Taelor and Sydni, and he admits they were the reason he fought so hard up until the very end.

Stuart Scott showed us that sportscasting could be fun. His wit and energy as a reporter will forever be unmatched and he will be sorely missed. One thing is for certain, however, and that’s that his slogans and inspiring quotes will always live on.

When referring to someone playing at a high level with ease, but also, himself.

“As cool as the other side of the pillow.”

When a player was getting more rebounds than anyone else on the court.

“They call him the Windex Man cause he’s always cleaning the glass.”

When someone would begin to dominate a game.

“Just call him butter ’cause he’s on a roll.”

When someone would make a smart play.

When someone would get ejected from a game.

“You ain’t got to go home, but you got to get the heck up outta here.”

When Bryce Harper hit a homerun.

“And the Lord said you’ve got to rise up!”

On his fight with cancer.

“This whole fight, this journey thing is not a solo venture. This is something that requires support.”

On his biggest inspiration and reason for living.

“The best thing I’ve ever done, the best thing I will ever do is be a dad to Taelor and Sydni. I can’t ever give up because I can’t leave my daughters. I love you girls more than I will ever be able to express. You are my heartbeat. I am standing on this stage tonight because of you.”

On how to live life with cancer.

“When you die, that does not mean that you lose to cancer. You beat cancer by how you live, why you live, and the manner in which you live.”

On the only solution.

“So live. Live. Fight like hell. And when you get too tired to fight, lay down and rest and let somebody else fight for you.”

You can watch his inspirational Jimmy V Perseverance Award speech at the 2014 ESPYs below.