The Best Moments From The 2015 Women’s World Cup!

For those of you who were quite possibly living under a rock for the last twenty-four hours, the United States Women’s National team won the 2015 World Cup on Sunday! Beating Japan with a score of 5-2, the ladies of Team USA proved to be the best in the world. This was their first time winning the World Cup since 1999. 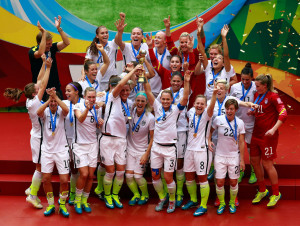 USA midfielder and co-captain Carli Lloyd (#10) scored three goals in the third, fifth, and 16th minute of the first half of the game! This was the fastest hat trick in Women’s World Cup history. 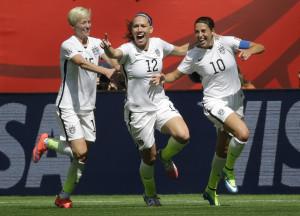 Lauren Holiday scored a fourth goal for the U.S. in the 14th minute. Japan didn’t seem to enter the game until the 27th minute, when Yuki Ogimi scored her team’s first goal. Japan’s second goal came from a U.S. own goal. USA midfielder Tobin Heath immediately turned the goal around and scored in the 54th minute, bringing the score to 5-2. The U.S. held this ground until the end of the game, beating Japan 5-2!

Needless to say, the girls played an absolutely AWESOME game, and we are so excited that they were able to bring home the win against rival Japan. Check out just a few of our favorite moments from the game in the videos below!

And lastly, here is a compilation of all of the highlights from the game: